IT’S 11pm, and Magaluf is grinding into action.

On the Strip, scantily clad girls at the City Lights bar gyrate on raised platforms while Irish and British youngsters sink cheap shots and cocktails.

Over the years, this Mallorca resort has become a byword for bad behaviour. Its heady brew of sex, drink and violence is manna from heaven for tabloid-headline writers, with a daily onslaught of stories proclaiming the worst excesses of north European youth.

In truth, most of the youngsters here are well-behaved kids, many enjoying their first overseas holiday away without the family and exercising their right to cut-price booze. Two Sex On The Beach cocktails here cost as little as €4.50, two pints just €3.

But despite the best intentions of Mallorquins and the local business community, Magaluf is finding it hard to shed its bad-boy-and-girl reputation.

“A few lads we know have got a hiding over here,” said Sean, 19, from County Watefrod, who is here for a week with a group of seven friends.

“One lad went out on his own the other night and 15 English lads attacked him. He got battered with a baseball bat and had to have 12 stitches.  He went to the hospital, but was back out again the next night.”

It’s a graphic example of the dangers that can befall unsuspecting youngsters in ‘Shagaluf’, a nickname which needs no further explanation. Just last week, two British youngsters were filmed brutally battering a compatriot at an apartment block in Punta Ballena, setting about him in a sustained, sickening assault that was captured on CCTV. One of the culprits can be seen stabbing the victim with a broken bottle before the duo pummel him to a pulp.

The following day, a 19-year-old Brit was left fighting for his life after falling from a third-floor flat, sustaining a broken leg and life-threatening injuries. On Wednesday, an 18-year-old British girl reported an alleged sexual assault to Spanish police as Magaluf’s grim roll call lengthened yet further.

The annual ritual of debauchery has spurred locals into action. In June, an updated list of 64 regulations outlawing bad behaviour were issued by Calvia council, the local authorities charged with upholding law and order.

The list of misdemeanours are split into three categories. ‘Minor’ offences, such as climbing a tree or shining a laser, are charged at between €100 and €599. ‘Serious crimes’, like defecating in the street, will see miscreants charged from €600 to €1,499. Bar owners serving under-age drinkers can be slapped with a penalty of between €1,500 to €3,000.

According to figures supplied by Calvia Town Hall, the first 15 days of June saw 25 complaints filed with the police for outdoor nudity, with one group of 18 drunken tourists fined last month after jumping in the sea totally starkers.

But despite this new clampdown, many are yet to discern a meaningful change.

“People have had enough of this bad behaviour,” said a spokesperson for the head of local business body ACOTUR.

“There are important people here that are working hard to change the image of the area.

“Thirty or so years ago, this kind of thing didn’t happen. Tour operators like Thomas Cook had guides who showed people what to do, where to go and what not to do. That doesn’t happen now.

“People here didn’t expect it to be as bad this year as last year. We have to change attitudes, and tell people. ‘You can’t come here and do whatever you want.’”

This week, Mallorca council and government officials sat down with local business and hoteliers to discuss the dilemma of badly-behaved young holidaymakers tarnishing the island’s reputation.

Despite the local outrage, Magaluf’s illicit thrills continue to draw boys and girls looking for a good time, with many young Irish choosing to base themselves in nearby Santa Ponca before heading into Magaluf for a night – or day – out.

“I got kicked out of my hotel the other day,” said 19-year-old Ray, from the Irish Midlands, as he slurps on a Sex On The Beach cocktail at Lennon’s bar.

Similar examples of youthful excess can be found in towns and cities all over the British Isles every night of the week.

But weary Magaluf bar and restaurant owners, many of them long established, have grown tired of the ‘unfair’ amount of negative stories emanating from their area.

“If you want to look for bad press, you can find it anywhere,” said Jason Brown, who runs thriving beach-side café Tom Brown’s, a popular local establishment since 1982.

“I got attacked in London with a knife. They are trying to change the rules here, but things can’t change overnight.”

The phenomenon of ‘balconing’, whereby daredevil youngsters try to leap from terrace to terrace, has also claimed more than a few victims here.

“They tied to raise the heights of the balconies to stop people doing that a few years ago,” continued Brown.

Many local Spaniards have long grown tired of their area being dragged through the mud.

“People who come here think they are better than us,” said Isabel Perez, 47, a local supermarket worker for 20 years.

“How would you feel if I came to your city and behaved like this? It makes people very angry.”

Nevertheless, it seems the overwhelming majority of holidaymakers here are simply out for a good time, and shy away from any hint of trouble.

“I hate fighting,” said Tom, a 19-year-old from Donegal on holiday with 13 pals.

“I was in Ayia Napa two weeks ago and you were always watching your back. We are staying in Santa Ponca. There are more Irish there.”

While the Brits may attract the lion’s share of the bad headlines, Irish youngsters have found themselves on the wrong side of the local press, too. Last week, local online media outlet Cronica Balear posted a video purportedly showing dozens of Irish youngsters dancing in the street at 6.30 am. Which could be dismissed as mere high jinks were it not for the fact many of them were pogoing on top of a car, destroying it in the process.

We have all been young and made foolish decisions through drink. And it does bear repeating that it is a small minority of fools spoiling it for the rest. The vast majority are guilty of nothing more than having a good time and – more than – a few drinks.

“I love all the people here,” said Jack, a 19-year-old from Donegal, sunburnt after spending the day on a booze-cruise boat with unlimited drink for €55.

“It’s amazing for us to see different people from all over.” 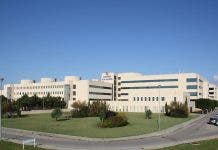