FOUR children lived with their mother and her partner’s rotting corpses for days in Andalucia.

The kids, aged between five and 13, thought the couple were just ‘asleep and cold’ after they had committed suicide.

They stayed with the bodies for FIVE days in the town of La Zarza-Perrunal in Huelva.

Authorities were only notified when one of the children told a neighbour their mum had been ‘sleeping for a few days’.

The shocked neighbour and landlord called emergency services who rushed to the home.

Cops were greeted by a ‘strong smell’ in the house.

They soon discovered the bodies of Rocio Aguilar and her partner Jose Antonio.

A probe found the pair had killed themselves by overdosing on medication.

A neighbour told El Mundo she suspected the couple were drug addicts after the family arrived in town just weeks ago. 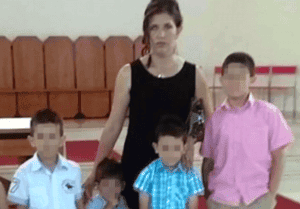 She said: “They were running from something, I do not know what.”

She added that the kids were living in squalid conditions.

She said: “They had some mattresses on the floor and they had no water or anything to drink, to wash the children they used wipes.”

The children allegedly told care workers they always fed and dressed themselves which is why they did not notice their mum and step-dad were dead.

The children were known to social services, and it is believed cops had checked out the home days earlier following concerns from the boys’ school.

But they left after the children said their mum was asleep.

All of the boys were immediately taken into care while the biological father is applying for custody.