THERE has been a food revolution going on in San Pedro for the last few years. 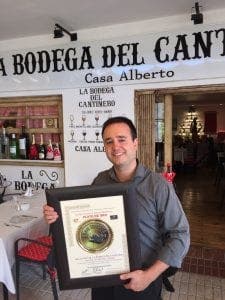 The knives have been drawn in a turf war between literally dozens of new restaurants that have opened in that time. Everything from Italian to Argentine, and Japanese to French, all nationalities are represented in this pavement tussle, that is great for the punters. And it is no surprise, with the town offering a wonderful central space off which thousands of people gather to graze at both lunchtime and dinner right through the year.

There is a definite focus on quality and style and to sur-vive you have to be good. “San Pedro has completely changed over the last few years,” explains Ross Duggan, manager at the popular Irish eatery and pub the Hogan Stand on the Boulevard.“It has a completely different atmosphere and all the scruffy builders and fraudsters we once had have well and truly moved on. “Now we can concentrate on quality.”

The leading purveyors of this drive for haute cuisine include L’Impronta, Macaao and Tutamaki recently opened on the boulevard, while the town’s most famous restaurant Albert & Simon continues to impress, despite the death of its celebrated chef Albert Benisty a year ago.

Across the road, Francisco Vacas at elegant L’Impronta continues to do a great job an upmarket joint, that is constantly upping its game. Highly seasonal in his use of ingredients the Cordoba chef left school and began cooking at the age of 13, and always insists on fresh pasta and the best line caught fresh fish.

If you are looking for something a bit more traditional, then step uphill from the boulevard towards Calle Andalucia, where you will find San Pedro’s most famous – and well established – restaurants and bars. Most famous of these is Restaurante Alfredo, which has been open for well over three decades and been hardly shut for more than three days in that time.

Indeed, this stalwart of a joint stays open for a near record 364 days a year, only shutting on New Year’s Day. More Spanish you could not find, with stuffed bull’s heads (and plenty more) hanging from the walls, wooden chandeliers and empty sherry bottles. A superb shady terrace outside is perfect for business lunches, while inside for winter is rarely anything but packed.

A true family affair, only its chef Ivan is an outsider and he’s been knocking around for over 20 years. Father Alfredo and his sons offer a great mix of meat and fish and plenty of seasonal fare to boot. Next door you should also try out La Bodega de Cantinero, run by friendly superhost Alberto, who has been working in restaurants since he was 14.

This is THE spot for lovers of sherry and he has hundreds of them and many going into the hundreds of euros, including a 1946 Pedro Ximenez and a 40-year-old Amontillado from Azuleta. But aside from the wine list the food is excellent and varied and there are always plenty of specials, including one of the best ajo blancos I have tried on the coast.

Best of all though – in fact maybe the winning dish in San Pedro – was the amazing tartaki of bluefin tuna, with a wakame salad, egg roe ‘tobiko’ and mayonnaise wasabi. In a word; perfect. It is no surprise that last year the restaurant won a national ‘gold award’ from Radio Turismo and he continues to go from strength to strength.

Another man helping to change the face of San Pedro is Malcolm Spendlove, who has been at the helm of the ever popular Passion Cafe for the last 15 years and now heads up one of the coast’s best hamburger joints, Mr Gourmet Burger on the boulevard. It counts on 100% beef burgers, halal too, while kids are encouraged to make their own ‘Junior G’ burgers in ‘four easy steps’.

Next door and rarely quiet look out for popular Irish pub and restaurant Hogan Stand, an Irish pub named after the famous Gaelic football stand at Croke Park. As well as having its typical bar snacks it also has a good mix of quality dishes, including rack of lamb and fish, and you dine on a nice terrace at the front. And then there is the new Gym Junkie Cafe, Spain’s first protein eatery, serving up vitamin-stacked meals – ideal before or after a workout. The cafe’s mouthwatering menu includes grass-fed beef, protein pancakes and an omelette bar – complete with seaweed, broccoli and tuna omelettes. 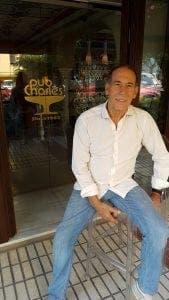 Pub Charles has been the coolest secret haunt for Sanpedreños since 1982. At its helm throughout has been charismatic owner Jesus Leal, who insists on talking to everyone who walks through the door. The 64-year-old hasn’t had much time off since he opened the bar 35 years ago, even completing a brand new refurb last year. “People come here for the attentive service and the ambience,” he explains. “Everyone is welcome here.”

He’s not wrong. Any given night sees Brits, Spaniards Germans, Russians and more sipping on their fishbowl G&T’s or beautifully decorated cocktails, soaking up the typically friendly San Pedro ambience. So when you’re next strolling around San Peds, you know where to stop off for a drink.

Thieves walk out of Michelin-starred restaurant in Madrid with 132 bottles of wine valued at €200,000

Luxurious living: Alison Bethell-Collins has the talent, experience, knowledge and, most importantly, the team to make your dream home a reality

Alex Trelinski - 1 Dec, 2022 @ 15:00
THE Balearic Islands regional government is looking to see if can limit property sales to non-residents. High prices and availability of homes to islanders have...