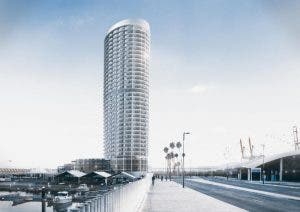 The skyscraper was given a positive report on its environmental impact by the Junta’s green ministry.

The report clears the way for the council to change the classification of the land in the city’s port to make it legal to build the imposing structure on.

It said the land, which is next to the cruise terminal and some 500 metres from the shore, ‘is part of the urban landscape and the visual impact of the area is already affected by business, industrial and transport activity.”

It added that the hotel ‘won’t mean any alteration to anything of natural value.”

Construction is now set to begin in 2020 if the plans get approval from the Spanish cabinet.

Special approval is required as ports are seen as a ‘national competence’.

Business leaders say the Junta’s report is a ‘positive move’ and will only lead to future investment in the city.