I FIRST fell in love when I was around 12. It wasn’t youthful infatuation but something far deeper which has lasted for 30 years.

Over those years, we’ve grown older and our appearances have changed somewhat but my love has never wavered.

And that’s because I fell in love with not a mere individual, but an entire country – Spain. 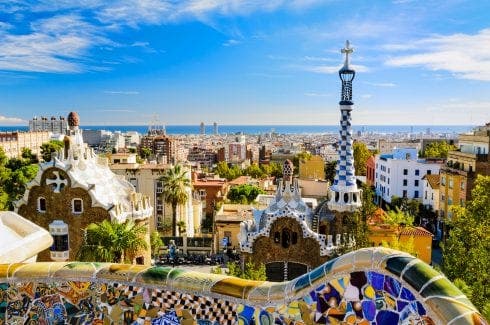 I spent my birthday that year in Barcelona where I felt like Dorothy when she first sees Oz in all its glorious Technicolor!

Later that year, my mum decided to forego spending Christmas Day in the traditional manner – enforced family reunions over dry turkey and sprouts washed down with booze and an argument about the telly – and we headed to southern Spain instead.

Fuengirola looked magical at that time of year. The decorations and twinkling lights in the trees provided a shimmering sparkle to the church square as we gathered to receive our cava and 12 grapes.

Even after all this time, I remember how excited I felt bringing in that new year as I enthusiastically popped a grape in my mouth at each toll of the church bell.
After that first Christmas and New Year, we returned twice a year; each time leaving behind a tiny piece more of our hearts.

The plan was to move to Spain one day but you know how it goes sometimes; life got in the way and it became more of a pipe dream.

Last year, as it looked increasingly likely that the UK would vote to leave the EU, we decided to bite the bullet and make that pipe dream a reality.

Before making the move to Spain, I worried that my appearance (bright red hair and assorted tattoos) would put off some of the older residents in the peaceful, mountain pueblo we’d chosen for our new home.

As it turned out, those were the things that sparked most of my initial conversations with the locals as they tried to translate my Wonder Woman tattoo’s inscription or commented on my “rojo” locks.

I also worried that I’d struggle with the fact I couldn’t speak much Spanish (and routinely forgot to take my Spanish dictionary with me) but again that proved unfounded when I discovered the universal language of miming and pointing.

My little family (which includes a cat, who thinks she’s a lion and a dog who’s scared of everything) have been warmly welcomed and there’s a sense of community here I’ve not felt since I was a child.

While the cat has adapted to our new life with ease, scaling new heights from our roof terrace and beyond, our German Shepherd is taking a little longer.

This year, we had her thick coat clipped to help her cope with the fearsome, summer sun. This led to being stopped on every walk for a game we’ve unofficially dubbed “Dog, wolf or whatsit?” and she’s been photographed more by tourists than any of the beautiful views or even the burro taxis!

Our summer has been filled with colour and music from the Ruta de tapas to the recent feria.

We’ve experienced it all as the plaza, which has been the hub of all activity, is just beneath our windows. We’ve had front-row seats for it all, from the comfort of our balcony.

I’ve rediscovered joy from simple things like hearing children’s laughter as they play in the plaza or catching the cheeky twinkle in the eyes of the elderly señores as they share a private joke on their bench, in the shade.

It sounds corny but in moving to Spain I’ve gone from merely existing on this planet to really living and I’m finally home (this is definitely where my heart is).

It’s easy to lose sight of the important things in life and begin to believe there are no choices along the way in the inevitable slide from cradle to grave.
However, I’m a great believer that if you’re unhappy with your life, you have the power to change it.

I don’t necessarily mean that everyone should move abroad to change their lives – obviously small changes can also make a difference.

It’s all about finding your joy during your brief stint on this planet whether that’s working your way through a bucket list, or as in my case, reuniting with your first love – y viva España!