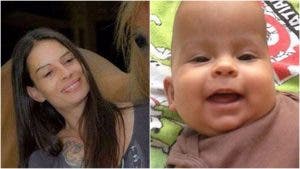 A MOTHER who slit her baby son’s throat in Spain has been jailed for 11 years.

Katharina Katit-Staeheli snatched tot Dylan away from a children’s hospital in Switzerland where he was awaiting surgery for hydrocephalus – a build up of fluid on the brain.

She hid for nearly a month with her son in Spain after fleeing Zurich but was spotted in January 2014 in a Costa Blanca shopping centre by the Guardia Civil.

Dylan was taken back to hospital but while Katit-Staeheli was being held in custody, she asked if she could bathe her son.

She undressed the tot and slit his throat and then tried to stab herself in the neck but failed.

The mother has now been put behind bars for 11 years after admitting murdering her son because she feared doctors would take Dylan away to ‘experiment with him’.

The mum was found to suffer from a personality disorder and saw ‘no other way out’.

She admitted that she was highly sceptical about conventional medicine and doctors and said she favoured homeopathy and traditional Indian and Chinese medicine.

When doctors told her Dylan needed an MRI scan, Katit-Staeheli said she panicked and decided to kidnap her son.

Spanish prosecutors demanded she be jailed for 17 years but judge Elche settled on a sentence of 11 years.