AN editor for a Spanish magazine has been ordered to appear in court over an article describing Spanish riot police as cocaine-snorting ‘professional junkies’.

The article was titled The continuing presence of riot police exhausts Catalonia’s cocaine reserves – Colombian cartels have warned they can’t keep up with such high demand.

Police unions said the story was potentially defamatory and lodged a complaint with prosecutors.

Editor Guillermo Martínez-Vela has now been summoned to appear in court today after legal proceedings were started. 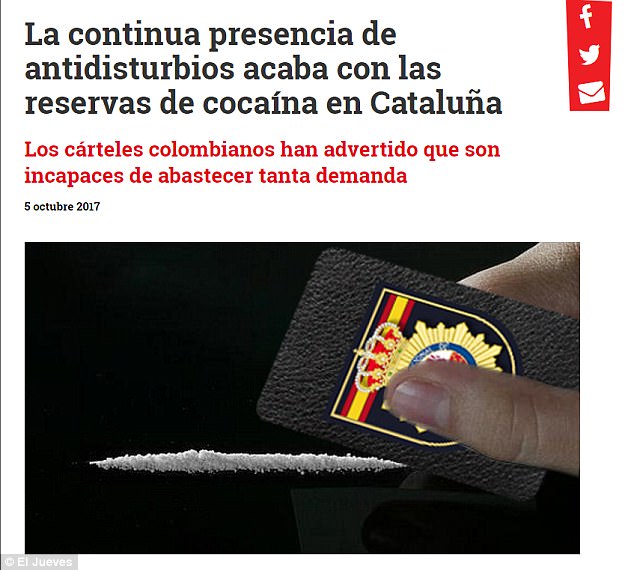 The ‘story’ was published on October 5, just days after the Catalan government held an independence referendum marred by police violence.

It included comments from a made up drug dealer who says: “I haven’t got a gram left, mate. No speed either. They’ve had it all. And you can’t sell this lot any old s**t – they’re professional junkies!”

It also imagined a scenario where officers temporarily housed in Barcelona were appealing for Spaniards to sell them extra cocaine instead of food handouts.

The article was retweeted thousands of times in Spain.

Martinez-Vela told The Guardian that the article had been widely shared online meaning some new readers may not have been used to the magazine’s satire.

He added: “It seems that those who were most shocked were a bunch of police unions, who pushed for a complaint to be filed – and then one was.

“We’ve been doing this for more than 40 years at El Jueves. We mix humour with current events and everything we do is fiction: we take elements of the news to make up funny fiction.”

The United Police Union (SUP) said legal action had been pursued because of the timing of the article coming amid hightened tensions with police facing intimidation in the wake of the referendum.