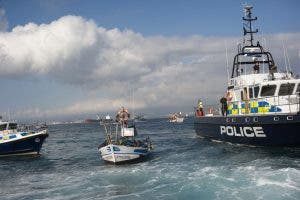 An investigation by the Gibraltar Olive Press has discovered that one boat, the Virgen Carmen I, entered Gibraltarian waters at least seven times last month alone.

According to the 1958 Geneva Convention on territorial waters this activity is firmly forbidden, with a three mile coastal zone around Gibraltar clearly under British sovereignty.

Local fishermen argue that Spain has a more than ample 4,964km coastline and boats like the Virgen Carmen are clearly flaunting the rules and antagonising Gibraltarian fishermen

Many other Spanish vessels have also been spotted operating illegally in Gibraltarian waters in October, including the Nuevo Leon.

A former RGP policeman Michael Sanchez fears that a ‘dangerous standoff’ is imminent and could lead to a serious incident.

“Things could get heated quickly and people could get injured,” said Sanchez, who now monitors the movements of ships in Gibraltarian waters.

He claims the slightest confrontation could lead to unwanted heightened political tension between the two territories.

Another maritime source confirmed to the Olive Press there was currently a ‘very dangerous’ climate over fishing rights.

“Spain refuses to take her claim over our territorial waters to the International Tribunal for the Law of the Sea,” he said.

“The country prefers to use the Law of Force instead of the Force of Law. This has led to very dangerous situations at sea.”

The illegal floating nets used by the Virgen Carmen I and other Spanish boats can damage Gibraltarian fishing vessels and local habitats.

“Gibraltar has strict environmental rules,” said the source working in the yachting industry, who asked to remain anonymous.

“Illegal Spanish fishing in Gibraltar is directly contributing to the continued depletion of endangered species, such as the white grouper and the European eel.”

Much of the fury from fishermen stems from them being fined or prosecuted for fishing illegally while local Spanish fishermen seem to get away with a slap on the wrist.

“The most I have seen is our police going up to a boat and telling them to leave,” said Michael Sanchez. “But that has no effect as they will just come back later.

“Gibraltarian waters need to be protected. And it needs to be done now.!”

When contacted the government claimed it was doing all it could to stop the incursions.

“The Environmental Protection Unit regularly challenges persons who are (breaking the law) regardless of nationality,” a spokesman said.

“Spanish commercial fishing vessels are regularly challenged when in our waters, with a number of cases currently being processed.

“We cannot catch everyone who breaks our environmental laws every time they break them regardless of their nationality and some, regrettably get away with it.”

In July last year, Spain arrested three Gibraltar fishermen accused of fishing in their local waters, leading to mass protests on the Rock.