A SUPERGRAN has been labelled a ‘true heroine’ after she jumped in to save a pub owner from a glassing attack.

The Glaswegian pensioner stepped in when the Moroccan builder got into a heated argument with Mortoni over the payment of a round of drinks.

The regular of Bar Mortoni, in Fuengirola, tried to stop the attack, getting battered to the ground and knocked unconscious in the chaos.

“She was so brave wading in like that,” wife and co-owner Hayley Mortoni told the Olive Press. “She didn’t hesitate and made a lunge to hold him back.

“But as she grabbed him he turned round and smacked her in the face.

“It was a big punch and it knocked her straight to the ground.

“It was terrifying..She was out cold for three minutes, she could have easily died!”

Luckily Trueman, a regular visitor to the coast, where her daughter lives, came round having suffered nothing more than a few cuts and bruises.

After being interviewed by the police, she was incredibly not taken to hospital, and was merely allowed to go home.

An ambulance that was called never actually turned up.

“One female officer asked if I was okay and they just left,” the pensioner told the Olive Press last night. “They didn’t seem interested in pressing charges.”

She continued: “The whole incident was pretty terrifying and guess it’s lucky that I am so strong and wasn’t more injured as the ambulance never even turned up.”

The trouble had started when a group of builders, who work on a local construction site, took offence to being made to pay for each round of drinks.

“They began acting aggressively, then suddenly they were throwing chairs around and that’s when Liz stepped in,” said Hayley.

Police were quickly called but when the group of eight Policia Nacional officers arrived, they greeted the builders ‘like old friends’. 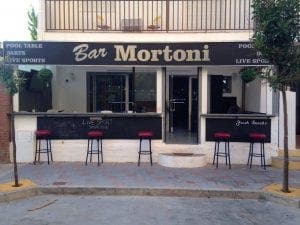 “They laughed and joked and shook hands,” claimed Hayley. “But when we asked to give statements they said ‘sorry, we don’t speak English’.

“The incident has clearly been brushed under the carpet.”

Policia Nacional in Fuengirola said they could not comment on the case as there was no official denuncia to reference.