IF you were planning for a tour guide but forgot to book in advance… don’t worry, just follow your feet and Ronda will do the rest. 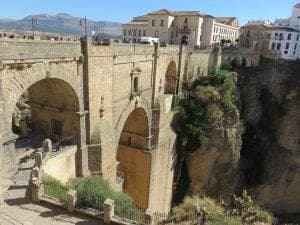 Perched on an inland plateau driven out of the earth like an offering to God, it isn’t hard to see why the historic gem is the gift that keeps on giving. Crammed full of historic buildings, churches and museums, despite what Ernest Hemingway once claimed (that it was a town to merely spend a romantic weekend in bed), there is so much to see and do in Ronda.

However, at 800 metres high, and totally encircled by mountains, it’s not for the faint-hearted so get prepared to do some serious walking. My tip is to start at the bottom, where you will find few tourists and where, best of all, you can easily park your car. Down near the Arabic Baths in the Ocho Canos district you will find an old, atmospheric part of town where the ancient weary travellers usually first arrived in Ronda.

Built in the 13th and 14th centuries they’re the best preserved baths in the whole of the Iberian Peninsula. The steam baths were an obligatory first port-of-call for all ‘outsiders’ to freshen up before finding a place to stay. Sadly, the taps have been turned off but the horseshoe arches are a great reminder of the influence and cultural importance the Moors had here. 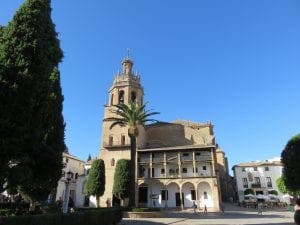 This was, after all, the most westerly outpost of the Kingdom of Granada the last bastion of the Moorish empire in Spain, holding out against the ever-probing Christian armies until just six years before the final fall of Granada in 1492. “The baths mark the beginning of so much in Ronda,” explains Juan Francisco, 31, who has worked at the baths for 14 years.

He is currently training to be a tour guide in the town and claims it is ‘not dissimilar’ to doing the ‘knowledge’ for cab drivers in London, taking two years to complete with an enormous amount to learn. From here, Moorish visitors would have walked up alongside the ancient city walls to the then heavily guarded Archway of Philip V, known as The Moors Armchair. It is the main entrance into the old city and was rebuilt in 1742.

It is a must to see before trudging up the renaissance steps to the charming Casa del Rey Moro – and its impressive mine – which was visited by Michelle Obama and her entourage three years ago. From here, you can easily get lost in the old town of Ronda, which is a maze of cobbled streets and passageways largely cut off to traffic. 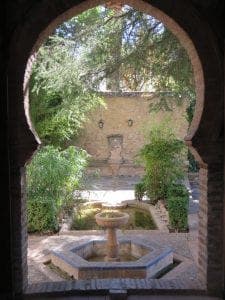 Generally keep heading uphill and you will be on track for the main attraction. The Puente Nuevo is Ronda’s most recognisable and spectacular sight, separating both the old and new towns. This is certainly the most famous bridge in Spain and probably among the best known around the world. Taking 34 years and a shocking 50 deaths (more than the Empire State Building and the Eiffel Tower) to build, this 390- foot feat of engineering really is remarkable. And all the more so with its surrounding countryside and adjacent buildings.

Looking down you certainly feel the full force of what an incredible engineering feat this was as well as recalling the horrific (most insist invented) incident in Ernest Hemingway’s For Whom The Bell Tolls where Franco’s nationalists are thrown into the ravine to their death during the Civil War. The best place to see the bridge in all its glory is from the Arco del Cristo, a short, but steep walk down the hillside towards some more ancient historic ramparts of the old town.

From here the bridge adopts human characteristics with drooping eyes and a long face, almost as if it is despairing at the lines of tourists barging against each other along the top. Back on the main thoroughfare and the town’s neo-classical architecture unfurls from Plaza Espana up towards its marvellous bullring.

Sauntering along Virgen de la Paz the buildings sag onto the road with a big bellyful of windows and latticed shutters while neighbouring shops lean into one another as if they were commenting on what ever stray traveller happens to be walking past. Families, friends and tourists form huddles in the alleys and streets nearby browsing the shops or filling up in a huge range of largely average restaurants.

The town’s main hub is Calle La Bola (or Espinel depending on its mood) a long pedestrianised street full of shops and with its bustling Plaza del Socorro square a little way up. Here you will find a stunning church and the ancient ‘casino’ where the father of Andalucian independence Blas Infante demanded the region be self autonomous in 1918. There is a statue of Blas outside. 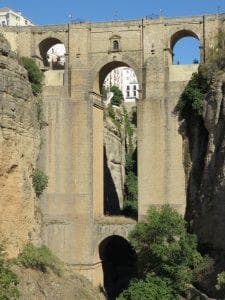 At the tourist information centre, multi-lingual Alicia Lopez says tourists simply do not spend enough time in Ronda. Although that is changing as more and more tourists do stay for at least one night. “Give Ronda more time,” she pleads, “at least two or three days because if you’re here for one day you’ll struggle to see everything.” At the tourist office you can buy a special €8 ticket giving you access to the Palacio de Mondragon, the Museo del Bandolero, the Arab Baths and the Puento Nuevo museum, which is excellent value.

The first three though are an absolute must and will keep you occupied for hours. Let’s also not forget the largest and oldest bullring in Spain – the beating heart of Ronda. A stunning structure, beautifully maintained with some fabulous Goya etchings in a side building, it is yet another must-visit spot. Legend has it that when a nobleman fell from his horse and risked being gored to death, without hesitation local hero Francisco Romero (b 1698) leapt into the ring and distracted the bull by waving his hat, and then killing it.

Half a century later, Romero’s grandson Pedro (who has a statue outside the bullring) invented the modern bullfight using the muleta – a red cape used to attract the bull’s attention. September’s annual Goyesca bullfight in 18th century costume pays tribute to Ronda’s rich matador history and is famous the world over. The bullring is encircled by roads named after two of the 20th century’s most famous icons – Ernest Hemingway and Orson Welles, who both spent considerable time in the town, with the latter being buried here, his ashes scattered in a well at a bullfighter’s estate near the town.

Further up Virgen de la Paz you reach the Alameda del Tajo, a beautiful tree-lined promenade, which is the perfect place to see out west over the Tajo gorge towards the Sierra de Grazalema in the distance. If time is no issue I would recommend the Museum of Ronda in the old town, which is a firm reminder of the clash between the towns Moorish roots and it’s Catholic architects.

And there is, quite simply, so much more to see if you have the time. And nearby are a dozen amazing towns and villages to keep you occupied for easily a week. ‘The whole city and its surroundings are a romantic set,’ Hemingway once wrote and it is true that Ronda is a place in which nature and culture unite to exhibit the best of both worlds.