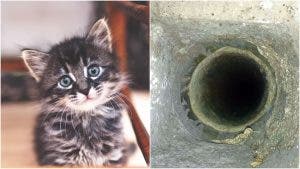 A KITTEN is understood to have died after a rescue effort was thwarted by vineyard owners, claim animal rights activists.

It comes after the Olive Press ran an appeal to allow residents into the Cadiz bodega Barbadillo to help save the animal.

The activists claim the bodega, in Sanlucar de Barrameda, prevented anyone from entering the vineyard using excuses that they were busy and it was ‘not your business’.

Activists called in police and fire crews and tried to save the cat by attaching food at the end of a rope and luring the cat out.

It came after they had heard its continual cries for up to two weeks.

One activist told the Olive Press that at least the owners started to collaborate after our article.

“Thanks for getting involved, although sadly it appears it was too late,” said Eva Pena.

“Clearly animal rights don’t exist in Sanlucar, but we all did our best.”

The vineyard originally claimed it was impossible to break open the pipe without causing substantial damage to the apparatus.