SUSANA Diaz’s Junta has only recovered €16.5 million from the ERE and training courses scandals.

Money recovered from the ERE scandal totals €4.6 million, just 0.5% of the €855 million that is believed to have been stolen.

Meanwhile, in the training courses scandal, €11.9 million has been recovered out of €149 million.

The ERE is the biggest case of corruption to ever hit the region, with over 200 being formally accused.

It has seen a huge probe into the misuse of some €150 million in public funds by Andalucian Socialist government officials, their business associates and even the major trade unions.

Among the allegations to come to light are that public officials blew a fortune on cocaine and girls sending a hapless and well rewarded chauffeur, turned whistleblower, to collect them.

It is thought to have cost the Junta €855 million.

Three quarters, it claims, are still in the Hacienda, being either still under seizure or tied up in insolvencies.

Andalucia’s Partido Popular deputy Ruiz-Sillero has warned that ‘time is against us’ before claiming that ‘the money will never be recovered’ because ‘the PSOE has no interest in recovering it and votes against proposals to recover it.’

According to the PP, ‘the ultimate goal’ of the Andalucian PSOE Government is to put the issue ‘in deadlock’ and ‘to erase from the memory of the Andalucians the biggest fraud in the history of Spain.’ 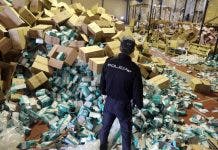