SPANIARDS have been warned to prepare for the Arctic front bringing snow and sub-zero temperatures to much of the country today and tomorrow.

The worst of the weather is forecast for Friday and Saturday, when snow will fall on the Iberian and Central mountain ranges after affecting northern Spain earlier in the week.

AEMET also warned of snowfall at altitudes above 900 meters in the Balearic Islands, including Mallorca.

The frosty temperatures are likely to extend into most of next week and be intensified by strong winds.

The sharp drop has been attributed to the ‘very cold sea air mass blowing in from the Arctic’. 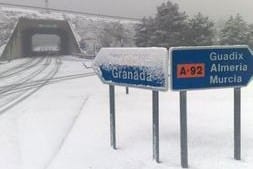 “With the exception of the southwest and coastal areas, lows will fall dramatically and remain below 0ºC,” said AEMET, which added that it was  ‘very likely’ that temperatures will drop below -10ºC in mountainous regions.

Cold air will extend across the peninsula and the Balearic Islands from today, causing temperatures to fall.

An orange warning has been issued to the northern regions of Cantabria, Navarre, Asturias and the Basque provinces of Álava, Bizkaia and Gipuzkoa, where between 12 and 20 centimeters of snowfall are expected.

Burgos, León and Palencia are also preparing for light snowfall. Overnight temperatures in Spain’s highlands will fall below -5ºC, with highs of 7ºC.

Most of Spain – including Aragón, Madrid, much of Catalonia, La Rioja and parts of Galicia – has also been warned to prepare for a sharp drop in temperatures.

As well as the snow and chilly temperatures, persistent rainfall has been forecast for Andalucia, the upper Ebro river basin, Navarre, the Pyrenees, the exclave cities of Ceuta and Melilla along the northern coast of Africa, and the western Canary Islands.

The rain will then reach the northeast of Catalonia and the Balearic Islands.