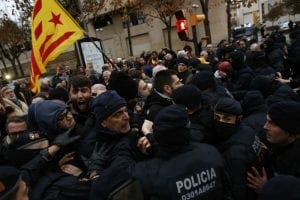 CLASHES have erupted after cops in Catalunya began removing medieval artefacts in an ownership battle with neighbouring Aragon.

The operation, which started at 4 am, is seizing 44 items stored in the Catalan Museum of Lleida.

The items are originally from Sijena convent in Aragon, which claims they were sold illegally by its nuns.

The operation, ordered by Madrid, comes as tension over Catalan independence continues. 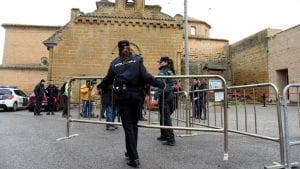 The legal dispute over the items dates back to the 1980s, when after moving their order to Barcelona, the nuns struck a deal with the Catalan government for the sale of the pieces, which include medieval sarcophagi, 16th century alabaster reliefs and 18th century paintings.

While Madrid has direct rule over Catalunya, Spain’s culture minister has signed a judicial order for the return of the treasures, with a midnight on Sunday deadline.

Challenges have been launched by local authorities and the museum, arguing that the case is still under appeal.

But the Guardia Civil have been authorised to seize them ‘with force if necessary’ – a move which museum director Josep Giralt said risks turning the operation into ‘a battlefield’.

The CUP, a hardline secessionist party, called on Catalans to ‘defend’ the artifacts as they had polling stations during the illegal October 1 referendum.

Mireia Boya, a CUP parliamentarian from Lleida, said the removal was aimed at ‘humiliating Catalunya’, and the case should be taken up ‘as a banner of resistance against (Article) 155’.

In 2015, after years of contradictory rulings and appeals, an Aragonese court found that the sales were illicit, and ordered the treasures returned. But Catalonia refused to comply, lodging an appeal which has yet to be ruled upon.