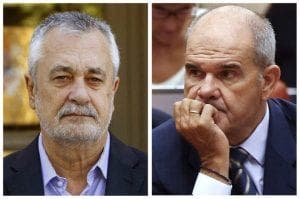 THE second day of the long-awaited ERE trial has concluded.

Today saw ex-presidents of the Junta Manuel Chaves and Jose Griñan lay out their defence.

They were joined by six ex-advisors and 14 others who stand accused of creating an €855 million slush fund between 2001 and 2010.

It comes after the Anti-Corruption Prosecutor’s Office laid out their case over a three-hour period in the Sevilla court yesterday.

In total, at least €855 million in public funds were fraudulently taken via the Junta over a decade.

In court today, Chaves’ lawyer called for the acquittal of all charges, saying he ‘neither knew nor could know the alleged irregularities’.

Griñan also requested an acquittal, with his lawyer saying he ‘never’ intervened in the granting of aid and ‘did not know of the alleged irregular use of public funds, given that it was not within the competence of his Treasury Department’.

It is a PR disaster for the Socialists, with Chaves and Griñan having been icons of the party during their leadership stints.

They were activists from their teenage years and worked for labour unions under the Felipe Gonzalez government.

They both appeared in a Sevilla court last year over the €855 million slush fund, intended for retired workers and struggling companies.

Under Chaves’s presidency between 2001 and 2008 more than €576 million was diverted into the fund.

Chaves said at the time: “I reiterate once again that the governing councils which I presided over during my time as President of Andalucia never pushed, maintained or adopted an illegal decision.”

The possibility of seeing Griñán behind bars is said to send shudders down the backbone of Andalucian socialism.

Current PSOE leader Susana Diaz continues to support the pair, saying they did not personally benefit or become rich through the scandal.

The investigation has had to be subdivided into multiple cases – one for each company that benefited from an irregular ERE or made an improper use of those funds – but not all are being processed at the same speed.