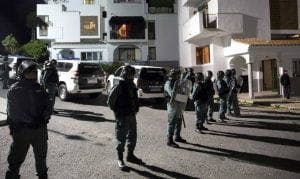 TWO people have been killed and at least five injured following a brawl between two rival Roma families.

The battle was organised in the Fuensanta neighbourhood in Coin last night to settle a disagreement.

Family members arrived armed with knives and clubs and the brawl is said to have lasted for hours.

The two fatal victims had their lungs perforated before dying at a Malaga hospital.

Witnesses said they tried to burn down houses after setting alight cars in the streets.

Both family clans – believed to be known as ‘The French’ and ‘The mute’ are linked to drug trafficking.

Policia Local had to call in the Guardia Civil, which brought in 40 additional troops to help control the carnage.

A police spokesman described the situation as ‘very serious.’

According to municipal sources, the first warning was registered shortly after five in the afternoon.

There have yet to be any arrests while one suspect thought to be behind one of the deaths is believed to have fled.

Despite the arrival of Guardia Civil, at around 8pm there were new violent episodes when a group of relatives of one of the victims approached the Coín health center to try to take back the body, which caused another brawl to erupt at the health center.

Police had to close the center while patients were diverted to the Regional Hospital of the Guadalhorce Valley.