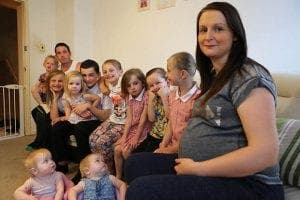 A BRITISH mother-of-12 has avoided jail after using stolen cash to pay for luxury holidays to Spain.

‘Queen of Benefits’ Cheryl Prudham spent more than €2,500 on an all-inclusive trip to the Balearics using money that her ex-husband Robert Prudham stole in a parking meter fraud.

The 34-year-old, from Cheshire, has been dubbed the ‘Queen of Benefits’ for cashing in more than €45,000 per year in government handouts while buying luxury gifts for her kids.

Her ex-hubby Robert was sentenced to 14 months yesterday after admitting fraud and stealing from Meteor Parking Ltd between January 4 and February 12, 2014.

He managed to get the job as a money collector by lying on his application, saying he was of good character and had no criminal convictions, when infact he had 18 previous court appearances for 29 offences.

He stole coins and notes from station car parks across Kent, including from a hospital.

Using the stolen cash, Cheryl Prudham paid for the expensive family holiday to Menorca with regular deposits at a Thomson’s holiday shop.

She appeared today at Maidstone Crown Court by video link from Warrington Crown Court in Cheshire, where she now lives.

Judge Adele Williams said: “This offence was in my judgement motivated by greed on your part.”

The court heard how Cheryl Prudham paid an instalment for the 14-day £7,671 holiday to Menorca in Spain in 2014 with some of the stolen money the day after her ex resigned from his job.

The couple have spent thousands on holidays and designer clothes.

Cheryl received a furious backlash after she appeared on Channel 5 documentary Benefits: Britain’s Most Shameless Mum.

On the show she bragged that her family was raking in thousands while splashing out on expensive holidays and designer clothes.

“I’m addicted to having babies and want to have another one soon,” she said.

“I don’t think it is anyone’s business – I can have as many children as I want.

“I’m claiming benefits that the Government have created for me.

“Why wouldn’t I take advantage of them?”

Ocean Drive Port Portals: the perfect hotel for your holidays in Mallorca