IT is up to 59% cheaper for British families to have a holiday in Orlando, Abu Dhabi or Dubai than in Spain favourites like Menorca, Ibiza and the Costa del Sol in early summer this year.

According to TravelSupermarket, a holiday to Menorca during May half term week is 144% more expensive than Abu Dhabi, 89% more than Dubai and 53% pricier than Florida.

Even equivalent 3* 7 day holidays during half term week to the Costa del Sol – which, for many years, has been seen as one of the best value overseas package holiday destinations for Brits – are as much as 64% more expensive than a trip to the U.A.E. (from Birmingham) and 11% pricier than a trip to Florida (from Manchester/North West). 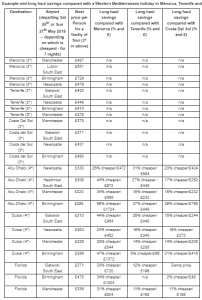 The starting price of 3* holidays to Ibiza and Gran Canaria are also more expensive.

Oman is also offering better prices from the South East than many of these Western Med destinations, with 7 night packages available from around £412 each to Muscat, with flights from Heathrow and 3* accommodation included.

Emma Coulthurst, travel expert for TravelSupermarket, says higher holiday prices to Spain and lower demand to the US plus a weakened dollar are creating a perfect price scenario for British families.

“Many Spanish hoteliers have been putting up their prices following a bumper year in 2016.

“This year, package holiday prices to Spain tend to be higher than many other short haul options – across the summer, prices are coming up cheaper to Turkey, Italy and France than Spain.

“Also, the euro exchange rate means you don’t get as much holiday spending money for meals out and attractions. And even if it has at last been improving over the last week, there is no knowing how it will be as Brexit negotiations continue this year”.

She continues: “Package holiday prices to Florida have dropped by as much as 35% year on year, following a slump in the sterling to dollar exchange rate in 2016 following the Brexit referendum (which was great for Americans visiting the UK, but not good news for British holidaymakers visiting the US) and a dip in worldwide visitor numbers after Trump’s inauguration. Brits have always been one of the US’s biggest inbound markets and Florida, particularly Orlando, relies heavily on tourism and can’t afford for us not to go there.

“Hoteliers, tour operators and airlines have reduced their prices significantly in the hope of encouraging us back. And it’s working. The Trump slump is likely to be reversed, where Brits are concerned, in 2018; package holidays are currently available from less than £400 each for a week and the pound has strengthened this month by 9.4% against the US dollar compared with last January. Orlando is the 4th most searched for destination this year so far on TravelSupermarket.com (compared with 7th last year) – above popular places like the Costa del Sol and the Canary Islands.

“Also, with the weakened dollar and still weak sterling to euro exchange rate, the price of eating out in Spanish resorts and Florida is virtually the same”.

Emma adds: “The Canaries, Mallorca, the Algarve and the Balearics and Spanish mainland are some of the most searched for destinations on TravelSupermarket for 7 night summer holidays this year.

“But British holidaymakers may not realise that they can go miles further for miles less money! These prices show that it is definitely worth comparing and contrasting what you can get between long-haul and short haul destinations for the same dates before plumping for a holiday – so that you don’t miss out on a destination of your dreams which will cost you less money than some of the Brit perennial favourites closer to home!”