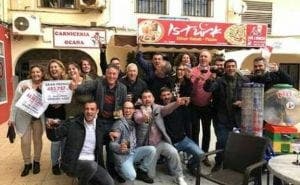 MANILVA has won more than €88 million in the latest EuroMillions draw.

The huge win was won by a consortium of 80 people in San Luis de Sabinillas and Manilva, meaning almost dozens of millionaires were made overnight.

The Spanish ticket was bought in the Loterías administration nº 6 of La Línea de la Concepción, located in the Carrefour Gran Sur-Torres Shopping Center, which is owned by the Luque de Manilva family.

Manilva town hall said the winning ticket belongs to a club with 80 members that in turn includes other micro-clubs, so the prize has been widely distributed.

The €88 million was actually just half of the draw which stood at a staggering  €174 million and was shared with another winning ticket in the UK.

Municipal sources have reported the win in Manilva has granted around 140 residents €750,000 euros each.