A T-SHIRT has been found in the search for an eight-year-old boy who mysteriously vanished from his home in Almeria last week.

Police confirmed today that the item of clothing contains DNA of Gabriel Cruz, who disappeared from Nijar last Tuesday.

The t-shirt was found 10km from the small hamlet over the weekend.

It was found by the boy’s father and his partner on Saturday next to a treatment plant near Barranco de Las Aguilas, in Las Negras, Nijar.

The search began again this morning, focusing on a 12km radius of where the boy was last seen, with a special focus on mines, wells and greenhouses.

The parents of Cruz said the DNA find gives them hope that they are ‘one step closer’ and that ‘he will return home soon.’

“It has to be this way, we won’t stop until we know what happened,” said mum Patricia Ramírez.

Ramírez, who said the authorities ‘have encouraged us’, reiterated the appeal made in recent days to a possible captor of her son,  urging them to ‘leave him in a park, wherever they want’.

“We are willing to do whatever it takes,” she said.

Father, Angel Cruz, said he ‘knew it was his shirt’ although he could not ‘be sure if he was wearing it that day’. 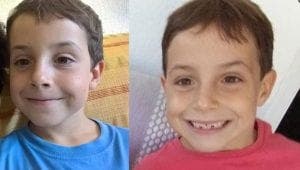 Ramirez added: “I wake up every morning with strength, I touch his scarf to somehow keep him present and close, I prepare his bag with new clothes and I look at his father, then I know that he will appear and that he has to see us strong, I do not want him to see me cry.”

Gabriel left his grandmother’s house in Cortijo La Molina de Nijar to play at a neighbour’s house – just 100 metres away – at around 3.30pm last Tuesday.

Police believe the boy could have got lost but they are not ruling out other scenarios.

His parents thought their son had arrived at the neighbour’s house and did not know that he was missing until around 6pm.

His disappearance was reported later in the evening.

More than 700 volunteers helped with the search over the following days.