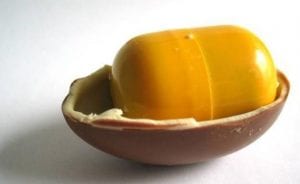 THREE children have ingested marijuana after finding a bag of the drug inside a Kinder Surprise egg.

Police are investigating how the drug got onto the school premises in Cadiz.

The three children aged between six and seven ate the marijuana by accident, believing it to be a treat, according to sources close to the investigation.

The children manifested symptoms of ‘malaise and dizziness’, and had to be taken to a health centre to be treated.

Tests confirmed the children were under the influence of hashish.