MALLORCA’S most historic funfair is making its annual return.

The Fira del Ram, which dates back to the 1500s, has returned with a fabulous 170 attractions for the whole family.

Located in Palma’s Son Fusteret area, there are games and rides for all ages, including bumper cars, a fun house, carousel, and plenty of rides that throw you high in the air and swing you about.

The fair is open everyday until April 15.

THE Fira del Ram dates back to the 1500’s when a sculpture was sent from Rome to Palma’s Santa Margarita monastery.

The sculpture of Saint Veronica, the woman who offered Christ her veil as he carried his cross to the crucifixion, went on display to the public for three holy days a year.

Before long the number of vendors grew so much that they spread out over the streets around the monastery – becoming the start of the Fira del Ram.

Around the 1700’s entertainment for the children joined the party, slowly turning into the fair we know today.

The first Ferris Wheel, now an icon of Fira del Ram, came at the end of the 19th century, when the fair was held near La Rambla.

For a while in the late 1900’s, the fair was an amusement park that travelled around neighbourhoods of Palma, until finally finding a home in Son Fusteret.

The statue of Saint Veronica is still open to the public on Palm Sunday at Palma’s Church of the Conception. 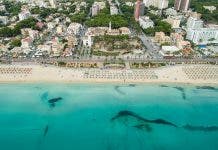