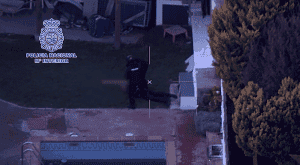 AN international drug trafficking group has been broken up in Malaga.

The gang has been transporting huge cargos of marihuana and hashish from Spain across Europe in a caravan – a system known as “Go Fast”.

During the operation La Policía Nacional seized a staggering 2,760 kilos of hashish, 20 marijuana plants, a gun and €17,000 in cash.

Eight men between the ages of 22 to 54, five of French nationality and three of Spanish, were arrested.

The criminal group, which has been under surveillance since the end of 2017, has been operating under false identities and using stolen vehicles.

The men have now been placed in police custody before appearing in front of a judge.