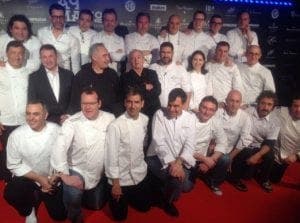 SOME of the world’s most prestigious chefs came together to pay tribute to the father of Spanish and Basque cuisine in Marbella on Monday night.

A Cuatro Manos was held in honour of the revolutionary culinary work of Juan Mari Arzak, the owner of three Michelin-starred restaurant Arzak, based in San Sebastián in the País Vasco.

Over a five day period, Marbella’s own two Michelin-starred chef Dani García, will unite some of the globe’s most recognised chefs on the Costa del Sol.

Now in its fifth year, the annual event held at the exclusive Puente Romano hotel, celebrates those who have paved the way for modern Spanish cuisine.

And this year made no exceptions as Arzak opened the event by taking to the stage to conduct the Tamborrada de San Sebastián – a traditional anthem which is performed every January 20 on the patron saint day of Donostia – the Basque name for the País Vasco.

The 75-year-old’s daughter, Elena Arzak – named the Best Female Chef in the World in 2012 and co-owns the restaurant Arzak – was moved to tears by the procession in her father’s honour.

Opening his self-titled restaurant in 1966, Arzak’s menus were based on traditional Basque cuisine, but offered a personal touch to each dish as he created them alongside his mother.

As the restaurant grew from strength to strength, the chef’s dishes evolved into a new gastronomical movement, named New Basque Cuisine.

In 1989 Arzak was awarded his third Michelin star, making him the second ever Spanish chef to receive the prestigious recognition three times – a standard which he has maintained until today.

Some 10 years ago he was awarded the Universal Basque Award for ‘adapting gastronomy, one of the most important traditions of the Basque Country, to the new times and making of it one of the most innovative of the world’.

Given the pioneer’s accolades, it seemed only fitting that the event was held on Father’s Day as Arzak is widely recognised as the father of Spanish gastronomy.

During the five day event, diners will be able to indulge in a menu combining Basque, Spanish and even Peruvian cuisines as Peru’s Gastón Acurio – recognised as one of the top 20 most influential chefs in the world – joined Dani García’s culinary team this year.

The 20 chefs have created dishes which not only reflect Arzak’s techniques, flavours and aesthetic but also incorporate products that are typically used in his menus.

Diners will be able to try the new menu until Saturday March 20 at Dani García’s restaurant, BiBo in Marbella.