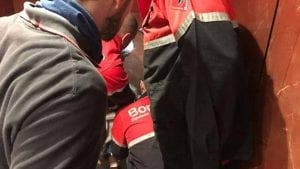 A MAN in Spain had to have firemen rescue him from a plastic chair after his testicles became trapped.

The pensioner, who was between 60 and 70 years old, was sitting naked on the chair before a planned shower in Torrevieja, Alicante.

But according to the Daily Mail, when he tried to get up, his testicles had dropped through the slats in the folding chair, and were stuck.

Two carers tried to assist him but had to call in emergency services for back up.

The fire crews decided to cut away some of the plastic slats which took around half an hour.

The guest was eventually freed but had to be treated for minor injuries at the University Hospital of Torrevieja.

Firemen said it was one of the strangest calls ever received and at first thought it was a prank.