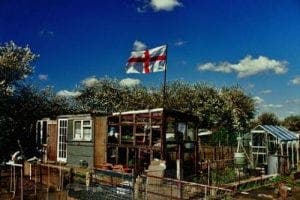 Living in a Spanish village I enjoy witnessing the inhabitants’ way of life. The locals I talk to (my Spanish is improving all the time) are fiercely protective of their traditions and lifestyle. It got me thinking about a piece I wrote about how people’s lives can be adversely affected by “so called” progress. My blog dealt with a group of people who found refuge in their little piece of East London. It made me wonder if something similar would be allowed to happen in Spain, perhaps it would, perhaps “so called” progress and development will affect everyone eventually …

“The backslapping and smug self-aggrandisement among the politicians and bid committee when they landed the 2012 Olympics was palpable. They didn’t give a thought to the people whose lives were enhanced by tending their allotments at Manor Gardens, a stone’s throw from the stadium.

The allotments had been there for a hundred years. There were fig and apple trees along with a vast variety of vegetables. Families and friends would meet and cook on the allotments. Sam and Sam Clarke grew veg for their famous “Moro” restaurant. Rick Stein featured the Cypriot family who held sumptuous barbecues for all.

For the allotment holders this little piece of rural heaven was a vital and life-affirming sanctuary from the hustle and bustle of the inner city. The allotments were destroyed in order to make way for a walkway to the stadium. There was nothing “the people” could do about it. However if you have £1800 per month to spend you can rent a one-bedroom flat above a soulless concrete concourse. Is that progress?”