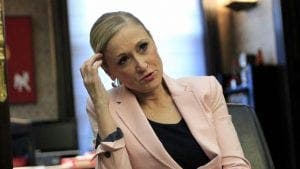 LEADER of the Popular Party in Madrid, Cristina Cifuentes, is facing a fresh probe over claims that she faked a master’s degree qualification.

Pressure is mounting for Cifuentes to resign from two opposition groups, with the socialist party PSOE, announcing it will again attempt to force a vote of no confidence against her.

Meanwhile Podemos has called for her immediate resignation.

Spain’s public prosecutor is now looking at evidence presented by the university, King Juan Carlos University, which has contradicted her claims.

One of the teachers has now said he did not sign the degree certificate, amid claims that a signature was falsified.

At a press conference in Madrid today, the 53-year-old said: “I am not going to resign because I have not lied about anything.”

It comes after Spanish news website, El Diario, broke the news that the politician failed to complete a degree in ‘public regional law’ from King Juan Carlos University (URJC) in 2012.

The regional leader claimed she had ‘misplaced’ her thesis, while the university also was unable to release a copy.

Reportedly, her certificate was altered at a later date to say she did in fact have the qualification.

After being caught out, Cifuentes later said that she did not attend classes or take exams with other students, as she claimed she had a private agreement with university tutors to accommodate her busy schedule.

It comes as a major embarrassment to the PP party who will launch its national conference in Seville this weekend.

Throughout today Spanish national media have live blogged the case as the investigation continues.