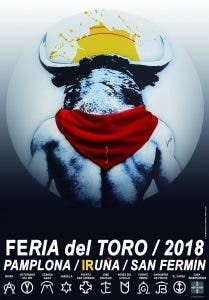 A COSTA del Sol French expat’s art work has been chosen as the official poster of the San Fermin bull running festival this year.

Former bullfighter, Loren Pallatier who lives in Benalmadena, is the first French artist who has been commissioned to create the poster for the annual Feria del Toro in Pamplona.

Originally from Paris, Pallatier was first put in front of a bull at just 14-years-old and later enrolled at a college to train to become a bullfighter, before turning his hand to painting.

The poster displays a minotaur with his back facing the viewer while he looks across the bullring.

Pallatier’s work will join a collection of San Fermin posters dating back to 1959 which belong to the Casa de Misericordia de Pamplona.