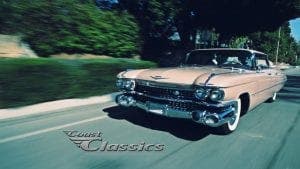 CLASSIC cars have been a long time passion of Andreas Ullstein, owner of Coast Classics in Estepona. His love affair started when he was 19 and bought his first – a quintessential Ford Mustang.

Fast forward a few years and with many a race behind him, including the Paris to Dakar rally, his friends questioned why Andreas hadn’t used his knowledge and expertise further.

So eight years ago, the award-winning Coast Classic cars was born. Walking into the showroom in the Estepona poligono, customers are greeted with a salon in the style of a 1950s american diner before being shown the array of collectible motors.

None of the cars on show are younger than 25 – 30 years. Andreas and his team are so good that a 1969 Ford Mustang Mach 1 won the Gold Award from the Mustang Club of America in 2013.

“It’s the stories behind the cars that drive the projects,” says German Andreas, who has been living in Spain for 26 years.

“Whether that be that the car is one of only five made in the world, or a grandparents that needs restoring to its original glory.”

The team can fix up any classic car and provide any service imaginable, including maintenance, repair, restoring, consignments and sales.

Using the latest computer technology, the workshop has made a name for itself in being among the best mechanics in the country.

“Most importantly we are extremely passionate in what we do,” adds Andreas, “We love the work and take pride in every job, and that shines through.”