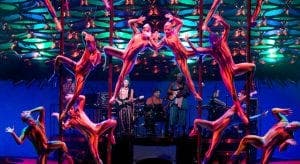 Expected to attract a Big Top crowd of 2,500 spectators on opening night alone, the show is in town for the entire month of June.

Popular with all ages for its theatrical, character-driven approach and absence of performing animals, each show is a synthesis of circus styles from around the world, with its own central theme and storyline.

A convoy of 76 trucks laden with 2,000 tons of materials for assembling the show arrived in Malaga three days ahead.

According to Javier Pérez González, security chief on the European Tour, the circus has to follow strict rules which differ from country to country. Every step of the process is calculated way before the circus arrives.

From the stage construction to the location of restaurants and offices, nothing is left to chance.

Tickets, priced from €28, can be booked at www.cirquedusoleil.com