SPAIN has been named a ‘key’ importer of illegal species and receives almost a third of the world’s illegally trafficked reptile skins.

According to ‘The Business of Extinction in Spain’, a study by the World Wildlife Fund (WWF), the species trafficking trade rakes in up to €20 billion per year and is one of the main causes of biodiversity loss in the world.

The WWF has called on the Spanish government to prioritise the issue and has launched the campaign ‘Stop Species Trafficking’, along with a 56,000-strong petition.

Spain is reportedly at the forefront of the illegal trade, as it is a gateway for numerous mafias, and is a relevant importer of animals.

This week the Guardia Civil arrested 45 people and intercepted almost three tonnes of endangered ‘angula’ eels, which are considered a delicacy in the Asian market.

The study, which collected data on legal trade and illegal trafficking of species in Spain between 2006 and 2015, states there had been a notable increase in commercial demand, with an average of more than 3,300 live animals seized per year. 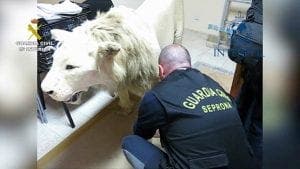 The WWF claims the country lacks a reference rescue center for seized animals and has launched twelve petitions in a bid to encourage new regulation.

Lack of resources, poor coordination among administrations and little rigor in the application of regulatory regulations are to blame for the increasing figures.