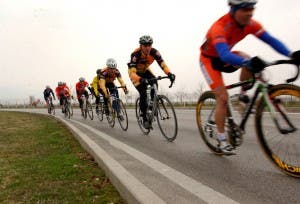 GRANTED most Monday mornings can prove to be the last straw, especially when I am running late, again, for my radio show and only on my second coffee of the morning.

Three café solos are normally needed to get me even near to a functional level.

Having bumped up the track that leads from the Casita to the main road, I was thundering down towards the coast.

I broke hard before the first bend, letting the momentum take Zappa – my trusty Ford Focus – smoothly around, the new tyres doing their job.

And there he was. Head to toe in pink Lycra that was unzipped to the navel, sweating profusely with his matted ginger hair sticking out from under his pink helmet, his mouth gulping in air, a strangled cry issuing from his lips, his eyes bulging wildly.

A Monday morning cyclist, obviously competing in the Tour de France in his imagination and smack on the wrong side of the road.

One of the things about Istan, the nearest pueblo to where I live, it that it is a dead end village. Having defeated the Moors in the mid-15th century, the Christian rulers decreed that they could not live in sight of the sea.

This was to stop them being able to signal to their brethren across the Mediterranean and many were moved to Istan.

Since then the village has – the failed Moorish uprising several years later notwithstanding – enjoyed a sleepy existence, evidenced by the fact that the road dwindles from two lanes to, if not one lane, one-and-three quarter lane width and ends in Istan, with a camino rural winding around the back of La Concha to Monda.

This makes it a perfect route for cyclists, with considerably less traffic than the Marbella to Ojen road or the Ronda road and means that they don’t have to try the, frankly suicidal, main coast road in summer.

The problem starts in summer season, and especially when the Tour de France, Giro de Italia or Vuelta de España are on. It inspires every weekend cyclist to don his (or her) Lycra and have a bash at the Istan road.

While I normally try and channel my inner Jack Nicholson’s Joker ‘Why can’t we all get along’, when you get stuck behind yet another arse in Lycra as you try and wind your way home, you can lose the plot somewhat.

If I want to see a sweaty man’s bum gyrating in front of me, then there are several clubs in Torremolinos that cater for such activities. Or so I have been informed.

With the planned construction of 30 luxury villas and 200 units starting later this year, it’s going to get even more ‘interesting’, as cement lorries, never the best at leaving space, start trundling up on a daily basis, not to mention the luxury SUVs, normally with Russian or German plates, who have their own ‘challenging’ interpretation of the Highway Code.

But back to Monday. I slammed on the brakes, swore profusely, and the cyclist wobbled off with not so much as a sideways glance.

“Why the feck are they allowed to practice this sport all the time?” I shouted at my startled passengers, “When I’ve been banned by Trafico for my own hobby of naked street luge?!”