A JUDGE has been forced to reopen an investigation into the partner of missing Scot expat Lisa Brown, after he controversially shelved the case earlier this year in Spain.

Javier Garcia Ramila is faced with the fresh decision of whether to charge and prosecute Lisa’s boyfriend and prime suspect, Simon Corner, after an expert analysis of his mobile phone, reported the Daily Record.

It comes after the Spanish judge chose to ‘freeze’ the two-and-a-half year investigation in April.

Corner, 36, had been the prime suspect since 35-year-old Lisa’s disappearance in November 2015.

He was arrested in April after going on the run, but was released from police custody after Ramila ruled the court had ‘serious doubts Simon Corner is the person responsible for the crimes of homicide or unlawful detention being investigated.’

State prosecutors had originally been behind the decision to shelve the probe but later changed their mind after the mother-of-one’s family appealed against it. 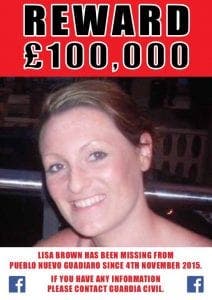 Three appeal judges at a higher court in Cadiz ordered the San Roque court which led the investigation to reopen the probe.

An expert analysis is set to be carried out on Corner’s mobile, which is thought to have been recovered by police at a Copenhagen harbour when the Brit was arrested in 2016.

A £100,000 reward is still available for anyone who can provide information into Lisa’s whereabouts.

Her body has never been found.