FLIGHTS between UK and Spain could fall by 95% if there is a no-deal Brexit.

The shocking forecast comes from the International Air Transport Association (IATA), which represents 290 airlines around the world.

The Spain-UK route is at particular risk due to the size of both markets and the huge volume of traffic between the two countries – currently 5,052 flights per week.

Iata’s director general and chief executive Alexandre de Juniac said a no-deal Brexit could lead to ‘thousands, millions of passengers’ potentially grounded at airports after the UK leaves the EU on March 29 2019.

“If nothing is done it will be a nightmare in the European and UK airports,” he said.

The EU and the UK’s Civil Aviation Authority have plans for a ‘bare bones’ deal that would guarantee a basic level of service, according to the report, which was compiled by the consultancies Taylor Airey and Frontier Economics.

But the UK government has warned on several occassions that a no-deal Brexit is still a possible outcome, casting a cloud of uncertainty and hampering talks. 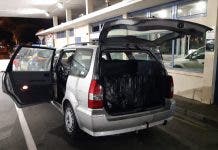