THEY are part of Spain’s living history – towns shaped over millennia by conquering civilisations with architectural styles that can never be repeated.

Everyone from Romans to Moors and Christians have had a hand in their creation.

And luckily for us, this diverse history has left dozens of Spanish towns with their own unique design.

Following our coverage of Spain’s most beautiful villages last week, we shine the spotlight on eight lesser-known gems singled out for their centuries-old design and architecture.

If you’re house-hunting, here’s where you can invest in a piece of the nation’s history. 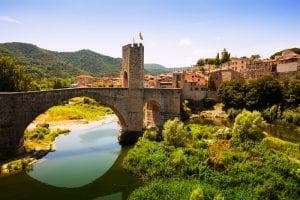 THIS stunning town has kept much of its medieval structures in tact.

The fortified citadel is laced with narrow cobbled streets that link to its iconic medieval bridge which is lit up every night. 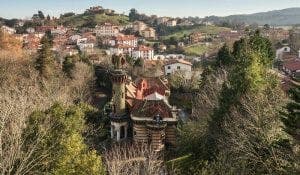 FEW people know that the small town of Comillas is home to an iconic Gaudi building.

The El Capricho building is unique among the Barcelona architect’s work, given its Persian minaret style.

Other stunning structures include the Sobrellano Palace. 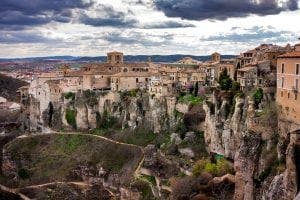 THE capital of Castilla-La Mancha is most famous for its ‘hanging houses’ built into the rocks. But this small city of around 50,000 inhabitants has other attractions. Perched on a rocky outcrop at an altitude of 956m, it’s listed as a UNESCO World Heritage site for its well-preserved history.

The Cathedral of Our Lady of Grace was the first in Spain built in the Gothic style while Plaza Mayor, the magnificent central square, showcases one of the country’s finest examples of Baroque architecture in its Town Hall. 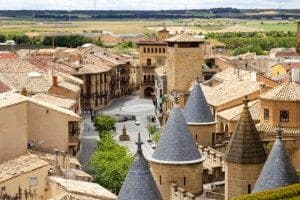 THIS tiny town, home to just 3,000 people, flaunts a fairytale palace that wouldn’t look out of place at Disneyland.

Built over several centuries, the Palace of the Kings is a fortress consisting of two royal residences and the church of Santa Maria la Real.

Its mild Mediterranean climate has also made Olite the capital of Spanish wine, so make sure you sign up for a tasting tour. 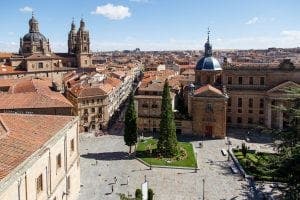 SALAMANCA is home to Spain’s oldest university, founded in the 13th century.

It is actually the third oldest in the world and once schooled Miguel de Cervantes, Spain’s answer to Shakespeare.

Other than its links to literary greats, this stunning city is a perfect example of old meeting new, with medieval structures intertwined seamlessly with 21st century buildings and homes.

PROBABLY the most unique town in Spain, if not the world – the entire population of 3,000 live under a rock.

Legend has it that Setenil was built underneath a cliff to provide shade during the sweltering summers while keeping heat in during the winter.

Setenil evolved from a fortified Moorish settlement and got its name from wineries which were carved out from within the rock.

Today the town produces olive oil and almonds as well as wine.

IN case you were in any doubt that Romans once ruled Spain, a trip to Merida will set you right.

Home to the best-preserved ruins in the country, the Extremadura capital boasts the Puente Romano, the longest Roman bridge ever built and still used by pedestrians today.
Its 16BC Roman Theatre could accommodate almost 6,000 spectators, making it one of the biggest arenas in the world relative to that time.

KNOWN as the ‘town in the sea’ – or the ‘Gibraltar of Valencia’ – no wonder hit fantasy series Game of Thrones couldn’t resist filming here.

The former fishing village was used for some of the famous scenes from Mereen, and since then the visitors haven’t stopped coming.

Visit the Castle of Pope Luna atop the Peniscola hill for a mind-blowing 360° view.