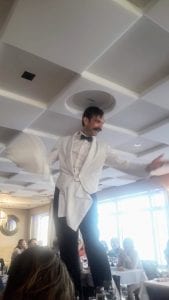 LAST weekend saw me in Gibraltar for a Fawlty Towers dining experience.

No, that’s not me using the classic 70s British comedy series as a metaphor, which by the way, contained one of my favourite characters of all time, ranking just below Uncle Monty, the Major – sample line “I must have liked her, Fawlty, because I took her to see India.”

The lunchtime theatre performance saw Basil, Sybil and, of course, Manuel, interacting with the guests in a show that included classic scenes including Manuel’s pet rat getting loose as well as Basil discovering that there was, indeed, a party of Germans in the audience. He may have mentioned the war, but we think he got away with it…

There was also some brilliant improvisation, with the cast picking out members of the audience and, returning from powdering my nose at one point, I was lambasted by Sybil for my striped shirt. “Wearing your pyjama top are you, Sir?” she commented as I tried to sneak past unnoticed.

It was, of course, all an act, but it made me reflect on some of the less than savoury dining experiences that I have not enjoyed so much over the years. I frequently write restaurant reviews that have brought me into culinary contact with the good, the bad and the frankly foul. There was the restaurant that was so bad that we seriously contemplated ordering a takeaway pizza to be delivered to our table. The chef walked out halfway through our review, leaving what I can only assume was the blind kitchen porter who had lost his taste buds in a tragic accident to prepare the rest of the meal.

And then there was Venice. I imagine that if you have limitless cash to spend or know the places to go, then the floating city must be a heady combination for the senses. When I visited for Carnivale on a ‘memorable’ press trip, however, it became an exercise in avoiding being ripped off every time we ordered food and drink. Most famously we were warned by one fabulously disheveled waiter that the €5 pizza advertised outside his establishment was ‘very small and not very good’, and when the beer coaster sized slice of gloop on a dough base duly arrived I was forced to agree. I spent the rest of the three days ensconced in an Irish pub (this was back in my drinking for Dublin days) pausing only to dash out to wolf down McDonalds. As much as I detest patronising the fast food megalith, unless I was viciously hungover (see previous sentence) it was the only place that I knew exactly what I was ordering.

Basil Fawlty would not have approved…