A SPANISH expat living in Dublin has called his family to let them know he is still alive following a Facebook hoax.

Fernando La Fuente called his family in Spain to tell them, ‘basically, I’m not dead,’ after his football club Ballybrack FC falsely announced his ‘tragic’ death on social media.

The Leinster Senior League (LSL) has launched a probe into why the Dublin-based club said their player had died in a ‘traffic accident’ on his way home from training last Thursday.

It is thought that the club revealed the fake news so they could get an important match with Arklow Town on Saturday postponed.

The Spanish IT worker and left-back, turned striker, was nicknamed ‘Lazarus of Ballybrack’ and spoke of his shock at the news of his death.

Speaking to The Sun said: “I was just in from work playing some video games and I got a call from work and they tell me I’m a celebrity.

“They started sending me all these news articles and that’s how I found out that I was dead.”

The LSL chairman Dave Moran confirmed he is meeting with the south Dublin-based club tomorrow.

He said: “We’ll be meeting with Ballybrack tomorrow to discuss what happens from here, but I’ve spoken to the man responsible and he’s really hurting bad.

“He’d no idea it would go this far and he’s hugely upset, so as of now all our focus is on helping him.” 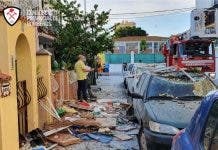