THIS weekend stargazers across the world will be able to see the ‘super wolf blood moon’ eclipse.

From Sunday evening the rare eclipse, that only occurs once this decade, will fill the night sky.

The lunar phenomenon is seen as by some as a sign of upheaval, while some conspiracy theorists even think it represents the ‘apocalypse’.

Here is everything you need to know about catching a glimpse of the super wolf blood moon in Spain this weekend:

What time, how long and where?

The super wolf blood moon will be in full view over Spain at 05:41am on January 21.

Ireland and the UK will see the spectacle at 04:41am local time on January 21.

The event is set to last for an hour and will not occur again until May 2021.

The super wolf blood moon is a combination of three rare celestial events.

A ‘supermoon’ will occur, which means the moon will be at its closest point to earth on its orbit, which will make it appear larger.

The red ‘blood’ colour will be created by a total lunar eclipse, which is where the earth moves between the moon and the sun, blocking its light.

The third part of the event, ‘wolf’ is the name given to the first full moon of January.

Will I be able to see it?

AEMET are forecasting skies generally to be a ‘little cloudy or clear’, but say there may be ‘cloudy intervals on the eastern Mediterranean coast’.

After the US, Western Europe is the most likely place to catch the full eclipse, so those in Andalucia are in with a great chance.

Will the world end?

“Obviously these apocalyptic signs in the heavens are pointing to a catastrophic event that is just on the horizon,” preacher Paul Begley from West Lafayette, Indiana.

One of the best known predictors of the apocalypse is pastor John Hagee, who wrote the book ‘Four Blood Moons: Something is about to change’.

Hagee claims that the event is referred to in the book Joel 2:31: “The sun will be turned into darkness, and the moon into blood, before the great and terrible day of the Lord come.”

If the world does end this weekend then the UK will not leave the European Union, set to take place on March 29. 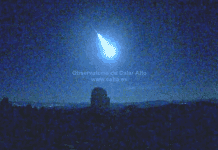 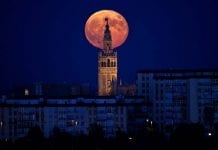 What is tomorrow’s Harvest Moon and when is the best time to see it? 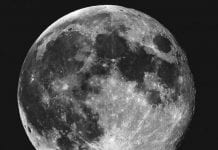