A DOG walker in Manilva found the corpse of a suspected narcotics dealer discarded on a beach popular with expats.

It came after a high speed chase on Sunday at 3:00pm saw drug traffickers evade police using a powerful boat.

Later at 5:00pm, customs officials found the same boat, a rubber model with outboards, but again the man escaped.

Neither chase resulted in a collision or anyone falling from the boat, according to police.

Later, an abandoned boat, drifting out at sea, was towed to Algeciras, but it is not known if it is the same boat as either of the other two.

When police were alerted by the dog walker about the corpse on the beach, they suspected it was linked to one of the boats.

A police spokesperson said the incident is ‘under investigation’. 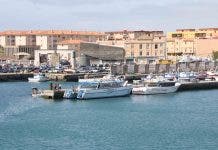