PEOPLE with disabilities, including older people, in Spain have been trapped at home due to lack of support, according to a shocking charity study.

Researchers for the Spanish Confederation of People with Physical and Organic Disability (COCEMFE) examined the living situation of 2.5 million people with physical disabilities.

They found that more than 1.8 million of those surveyed needed help to be able to leave their home, with those without support condemned to stay inside.

“We found people who are imprisoned in their own home due to the lack of accessibility in their own building,” said Laura López, director of Fundación Mutua de Propietarios, a group that collaborated with COCEMFE on the report.

Spain passed a law in 2013 which made homeowner associations responsible for ensuring their buildings are accessible to all.

Despite this a UNESCO report later found only 0.6 percent of Spain’s 9.8 million residential buildings meet accessibility standards for those with physical disabilities.

A UN committee for the rights of people with disabilities has also levelled criticism against Spain.

The committee, made up of 18 independent experts from around the world, said: “Measures taken to ensure universal accessibility, particularly for private buildings, have been insufficient or ineffective.” 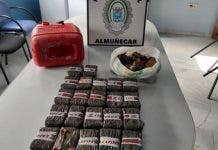