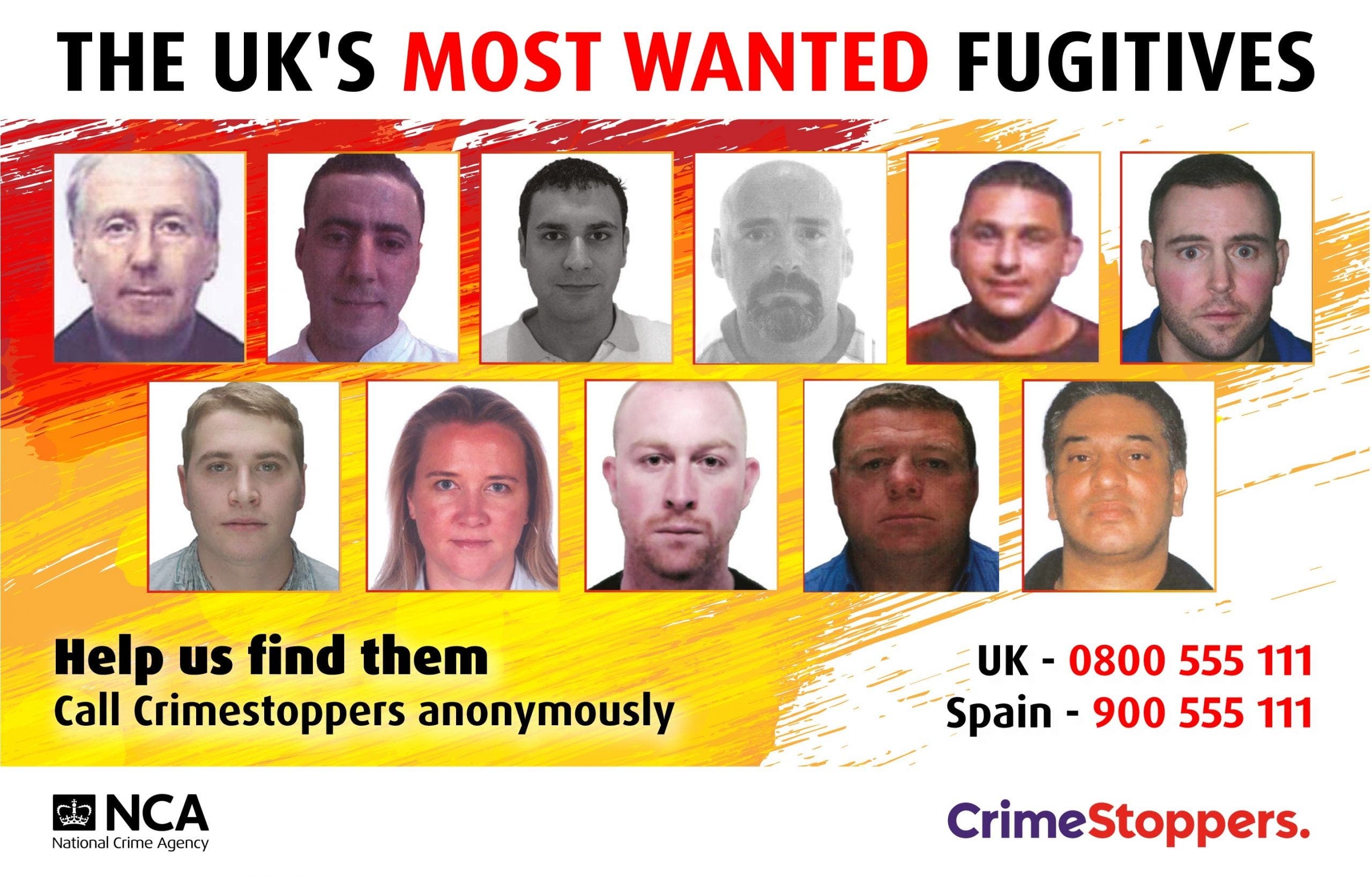 SUSPECTED murderers, sex offenders and drug traffickers are among the 11 most wanted Brits who have fled the UK for Spain and wider Europe.

The UK’s National Crime Agency has launched a fresh appeal today to catch the last remaining fugitives in a campaign which has already seen 84 captured.

It comes after the Olive Press snared most wanted fugitive paedophile Matthew Sammon at the end of 2016 before helping hunt down big time alleged fraudster Mark Acklom.

All of the remaining crooks have connections to Spain but may have moved around over the years and will be using false identities.

The NCA is re-releasing their details as millions of Brits are enjoying their summer holidays abroad.

“As my fellow Britons know, the success of Crimestoppers, whether in the UK or Spain, is all about the active support of ordinary people for the work of the police, so I would like to appeal to British residents and holidaymakers in Spain to be on the lookout this summer for these 11 fugitives from British justice,” said British Ambassador to Spain Simon Manley.

“Your information, given anonymously, can put these criminals back where they belong: behind bars in the UK.”

The 11 include Sarah Panitzke. Panitzke, 45, from Fulford, near York, who is wanted by HMRC and is accused of laundering approximately £1 billion for a crime group involved in VAT fraud.

To carry out the alleged frauds, she travelled extensively to places including Dubai, Spain and Andorra. She absconded in May 2013 before her trial finished.

Panitzke has a Yorkshire accent and is about 5ft 5in tall. Some 18 members of her crime group received sentences totalling 135 years.

Also on the list is alleged murderer Allan Foster, 43, who has been on the run since May 2006 when David Rice was shot dead as he sat in his car in South Shields, Tyne and Wear.

The NCA works closely with Crimestoppers, the Spanish authorities, UK law enforcement agencies and the British Embassy in Madrid as part of the Operation Captura campaign.

We have seen 84 fugitives returned to the UK out of 96 publicised cases. One case has been dropped.

Andy Cooke-Welling, of the NCA’s International Crime Bureau, said: “Operation Captura has been a resounding success.

“But we are still hunting the remaining fugitives on our list and will not stop.

“We urge holidaymakers and expats in Spain and elsewhere across Europe to keep their eyes and ears open this summer.

“There may also be people in the UK with vital information on their whereabouts, and we would urge them to get in touch. Having the public’s attention focused on them makes it so much harder to hide.”

Mark Hallas, Chief Executive at Crimestoppers charity, said: “Members of the public are one of our greatest weapons in the fight against crime. Once again we are asking the public to help track down most wanted individuals who are sought in connection with some violent, sexual and highly organised crimes.

“We’ve always had an overwhelming response to this campaign, to date 84 offenders have been caught across Europe.

“You can view all the appeals on the most wanted section of Crimestoppers website and if you know anything about the individuals please contact the Crimestoppers charity.

“No one will ever know who you are, not even us.”

Anyone with information contact newsdesk@theolivepress.es or Crimestoppers at crimestoppers-uk.org or call 0800 555 111.

If sighted, the public are advised not to approach any of the fugitives but to contact the police immediately.

Convicted in his absence in 2003 and jailed for 20 years for conspiring to import a commercial amount of heroin. Barton, who is about 5ft 6inch, has links to Fuengirola. He speaks with a Midlands accent.

Wanted for the murder of David Rice at Marsden Bay Car Park, South Shields in May 2006. He is also wanted for drug trafficking and theft. Foster is approximately 5ft 7in tall, uses the alias Shaun Michael Wilkinson and has links to the Canary Islands and Mallorca. 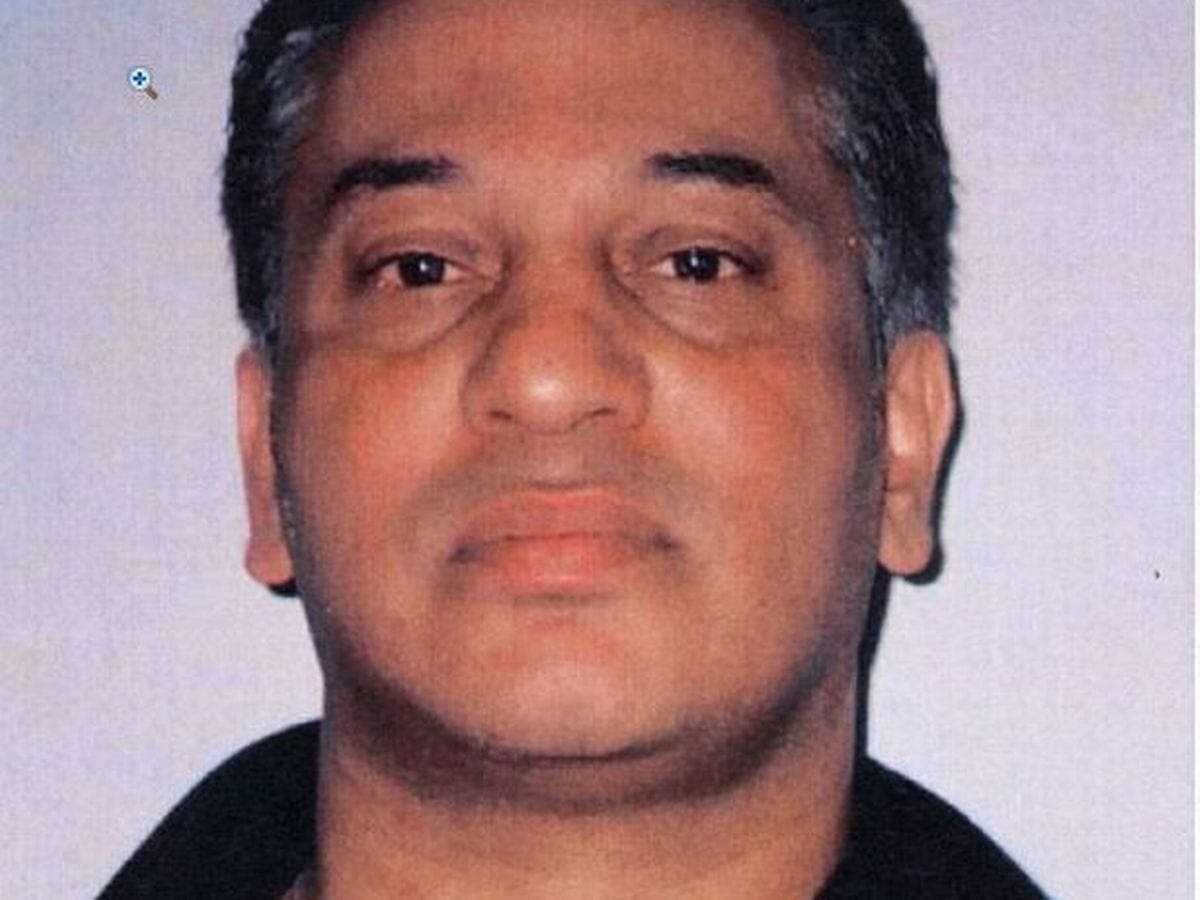 Accused of importing heroin into the UK in 2007. He was born in India, wears a hearing aid in his right ear, is approximately 5ft 7in tall and stocky. 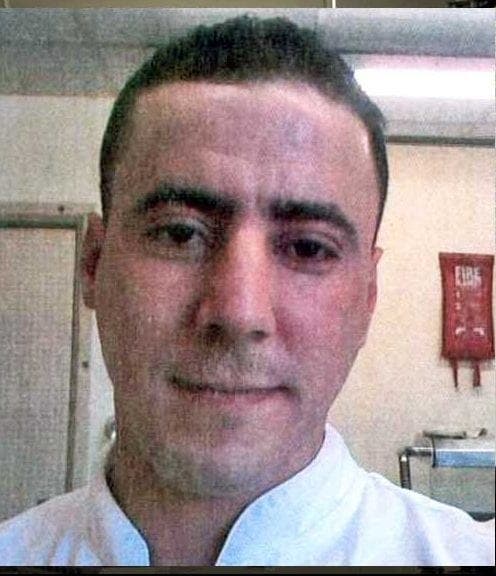 Wanted for the rape of a seven-year-old girl in 2007. He uses the nickname Samir.

Wanted in connection with the murder of Thomas Cameron in June 2007 at the Auchinairn Tavern, Bishopsbriggs near Glasgow. He is bald, has green/blue eyes and is approximately 5ft 1in tall.

Suspected of conspiracy to import 255k of cocaine into the UK with a street value of £53m. Dugic, who is from Serbia, allegedly played a major part in the importation.

Kelly is considered extremely violent and is wanted on recall to prison for serious assaults including paralysing a victim with a machete. He is around 5ft 10in, heavily built, has blue/grey eyes, a Scottish accent and occasionally a beard. He has scars on both sides of his face, his arms and his right hand.

Wanted by HMRC for fraud, she is accused of laundering approximately £1bn for a crime group involved in VAT fraud. She’s got a Yorkshire accent and is about 5ft 5in tall. Eighteen members of her crime group received sentences totalling 135 years.

Wanted by Merseyside Police on suspicion of conspiring to supply cocaine. Alleged leader of a drug trafficking gang that expected to bank £1.25m every month. Described as about 5ft 10in and blond.

Wanted by Police Scotland for alleged involvement in distribution of amphetamine with a street value of £11m. He is around 5ft 9in and has a large build.

Alex Trelinski - 3 Oct, 2022 @ 14:48
AN Alicante waiter has been arrested for placing his phone in a restaurant toilet to take footage of a regular female customer. The man's ruse...