TWO cannabis smoking clubs have been shut for drug trafficking in ‘crimes against public health’.

The legal sites in Benalmadena, belonging to the Cannabis Consumers Association, were being used to produce and distribute drugs on a large scale.

It comes after a British man with €70 worth of the drug was stopped by police in the area recently, claiming he had bought it at one of the clubs.

Officers arrived at the club greeted by a ‘nervous’ receptionist, before finding dozens of plants in a greenhouse in the basement.

The Policia Nacional then stepped in, before the Benalmadena City Council shut down the premises after finding its permit had been used ‘illegally’.

The day after the closure, police caught the owner trying to gain entry to the building and change the locks.

The other cannabis club had been shut down in 2018 when six people were arrested for drug dealing.

Owners of the site then appealed the decision to close, before police checked to see if it was being complied with last week.

Cops found a kilo of weed prepared for sale and even discovered that drinks were also being sold in the club.

They also found that staff sold ‘indiscriminately’ including to foreigners and minors. 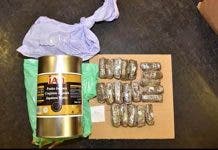