It comes after Brit tourist Nathan Smith, 23, was battered in the head for alerting elderly passersby to the con.

The ‘shell game’ involves a conman hiding a pea beneath one of three halved potato pieces as unwitting passersby bet money on where it is.

But game masters use sleight of hand and trickery to cheat passersby out up to €50 in cash.

Benidorm has tried for 30 years to rid its streets of the game, according to minutes from the Town Hall meeting, but awareness campaigns have not been successful.

Police are powerless as shell game masters are not committing a crime.

Gambling is illegal, but as passersby place the bets, it is they who are breaking the law – not the conman taking the money.

The motion is expected to be debated in Spain’s Congress on Monday.

Minutes from the meeting recorder a councillor stating: “We need quick proceedings and effective legal measures to eradicate this fraudulent activity from our streets.

“The shell game damages Benidorm’s image and our tourism industry.” 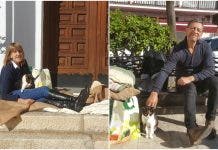 Joanne Oakley - 22 Feb, 2020 @ 11:00
Originally, the aqueduct ran for 98 kilometres from the coastal city of Valencia to the Tuejar river