A BLOOD-SOAKED British vegan activist has claimed ‘evil‘ farmers shot at her and her group through a window of a car after they rescued 16 rabbits.

Instagram user ‘Mythical Mia’ showed her 40,000 followers her blood-stained face and leg in a post, following her attempt to save the animals from a farm Gurb, Osona.

The Barcelona resident said: “The farmer was extremely aggressive and attacked us, strangling activists and smashing their heads with metal poles.

“The police came and told us to leave peacefully, which we did. After we left the farmers chased us down the motorway at 200km for an hour.”

Mia said that their pursers then surrounded them as they came to a dead-end, before managing to escape again onto the motorway, where the enraged farmers ‘pulled up alongside us and shot at us.’

However, Catalonia police have said it was unlikely a shotgun was fired, with the impact of the glass suggesting that the window was likely to have been hit by a ‘forceful object’ instead. They also said that 14 rabbits were taken from the farm, not 16.

Mossos d’Esquadra, spokeswoman for Catalonia police, said: “On Sunday, September 1 at 7.30pm, a group of activists entered a farm in Gurb, Osona, and took 14 rabbits.

“There were some farmers at the scene and there was tension between the two groups.

“Mossos separated them and escorted them from the premises to avoid further conflict.

“Just before 11pm, we were informed that one of the windows of an activist’s car had suffered an impact – and that a girl had injuries to her face as a result of the broken glass.” 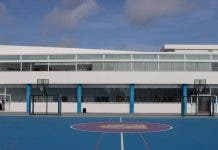