ON Spain’s election day, the first snow of the year has been reported in Mallorca, while much of the country has weather warnings in place.

Early this morning, snow fell in the island’s Serra de Tramuntana mountains at an altitude of 1,000m.

It comes after Spain’s state weather agency AEMET had predicted a ‘polar front’ and placed parts of Mallorca and Menorca on orange alert.

Around the country, 33 provinces have weather alerts in place, from Lugo in the north, to Malaga in the south.

The Costa del Sol has a yellow warning for 70km/h winds today, while the same alerts remain in place for Granada and Almeria until tomorrow.

Similar yellow warnings are in place for the region of Murcia and Alicante on the Costa Blanca until tomorrow.

Meanwhile the nearby province of Interior norte de Castellon has an orange warning in place for 100km/h gusts today.

In the south of Menorca 120 km/h winds have even been forecast by AEMET, along with waves of up to six metres in the north of Mallorca.

Much of Andalucia is forecast cloudy skies today and Monday, before temperatures are set to increase slightly on Tuesday. 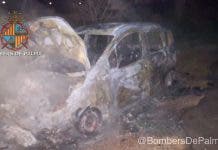 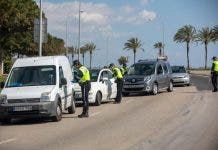