POLICE were alerted to a brawl at Sir William Jackson Grove where a 32-year-old woman had been stabbed in the leg.

Kirsty Podesta, 33, was arrested for wounding with intent at 2am last night in a Gib Five flat.

It followed an emergency call of ‘a disturbance in progress’ being made to the RGP.

“Further information was provided that both the victim and offender were both still within the residence,” said the Royal Gibraltar Police.

According to the caller, the suspect was ‘still armed with a knife’ prompting the police to be equipped with tasers recently supplied to the RGP.

“Officers executed a TASER-led operation, and conducted a limited entry into the residence,” the RGP reported.

“Podesta was arrested on suspicion of wounding and the victim was conveyed to St Bernard’s Hospital for treatment to a stab injury to her left leg.”

The suspect was taken to New Mole House Police Station where she was interviewed under caution before being charged with wounding with intent.

She appeared in the Magistrates Court this morning and was kept in custody until her next Court appearance in December.

RGP front-line officers only received Tasers in the last year with the Conducted Energy Device (CED) being used to incapacitate its targets. 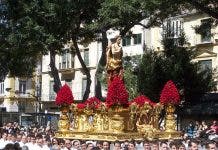