GUARDIA Civil have dismantled at gun-point a drug smuggling gang in the Mar Menor region of Murcia.

Investigations began in September, when the number of attacks on local people increased, the majority of them reportedly by drug addicts.

Further work uncovered a network of drugs being distributed in the Mar Menor region.

The gang employed known drug users to sell drugs, dishing out beatings and stabbings if they refused.

Evidence showed the gang supplied other distributors and users from all over the Mar Menor region.

The arrested are all Spanish, between 21 and 38 years old, and live locally.

San Javier Court has ordered three of the five to be remanded in custody.

Paul Canfield, who founded Street Angels, a community group aimed at working with local authorities to tackle street crime in the area, told the Olive Press he was “over the moon” with the arrests.

“If the group WERE related to local street crime, it’s an amazing result,” the 51 year-old said.

“Every time some of these are taken off the streets, it makes life a little safer,” he continued. 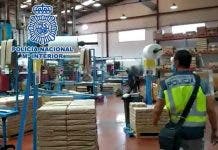