MADRID airport has been closed after drones were detected by pilots this morning.

The Madrid Bajaras airport has been forced to stop all arrivals and departures after two pilots notified air traffic control of the presence of drones near the runway.

According to El Mundo, all flights heading to the airport are being diverted.

The shutdown was enacted at 12.40pm and will remain in place until at least 2.40pm.

The State Air Safety Agency (AESA) has warned that flying drones in the vicinity of an airport is a ‘serious’ crime which can bring sanctions of up to €90,000.

Guardia Civil and Policia Nacional are attempting to locate the operator of at least one drone.

According to La Vanguardia, only the 32L runway has been left open for safety reasons in case of flights which cannot be diverted.

It comes just over a year since London Gatwick Airport was forced to close from December 19 to 21 when drones repeatedly flew in and around its airspace. 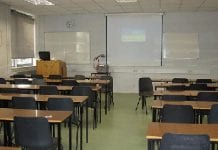