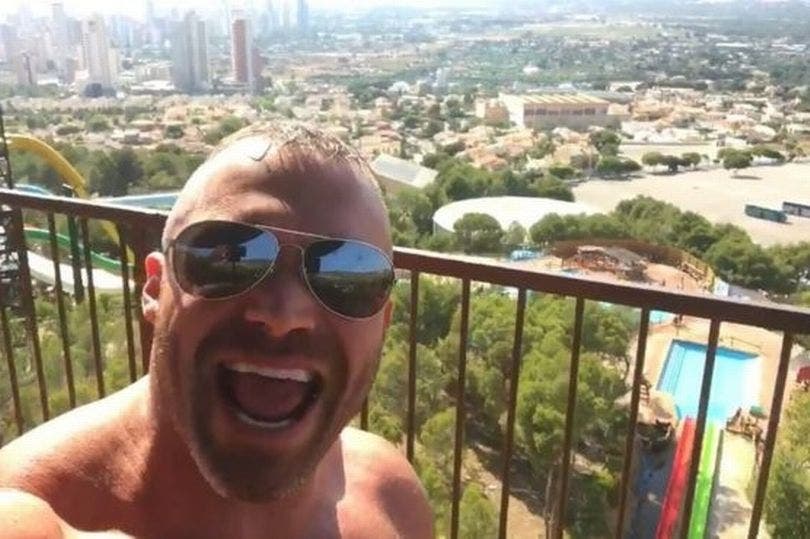 A BRITISH bodybuilder has been caught riding Europe’s highest water slide in Spain after suing a company for ‘leaving him scared of heights.’

Ben Bardsley, 38, is facing a more than €15,000 legal bill after footage emerged of him riding the 108ft Verti-Go in Benidorm on the Costa Blanca.

It came after Bardsley had made a personal injury claim for an accident in July 2015 which saw him fall into a garden pond.

Bardsley, from Stockport, had filed a claim against Warrington Koi & Aquatics at Manchester County Court after a bucket of one of its diggers knocked him into a pond the company was digging.

The professional gymgoer claimed injuries sustained to his neck and back meant he could no longer lift weights and that the accident left him scared of heights.

Aviva, the insurance firm acting for the pond supplier, hired investigators to probe his claims.

It found that Bardsley had continued to lift weights immediately after the accident.

Bardsley also uploaded footage of himself enjoying the highest water slide in Europe in Benidorm.

He says in the clip that ‘there’s no queue for obvious reasons’ before jumping down the 33-metre shoot.

Upon seeing the evidence, a judge at Manchester County Court said Bardsley was guilty of ‘fundamental dishonesty in respect of his claim’ and ordered him to pay the defendant’s legal costs of £14,318.

Damian Rourke, partner with Clyde & Co, representing the pond company, said: “It’s important to understand that Aviva never sought to argue that the claimant was not injured at all.

“Instead, the issue was that the claimant had exaggerated both the physical and psychological effects of his injuries to the extent that the entire claim should be dismissed.”

Rent in Spain’s Estepona almost DOUBLES in six years as locals blast being ‘priced out’ of Costa del Sol...