In 1936 Gary Cooper and Marlene Dietrich made the film ‘Desire’, a musical comedy with Spanish scenery as a backdrop.

Although the actors never set foot on Spanish soil, some images shot by a crew that visited San Sebastian and Toledo were recorded as backdrops, and for this reason, for the first time, not only one but two Spanish castles made it into a Hollywood film.

Many years have passed, and many Spanish movie castles have appeared on silver screens all over the world, four of them alone in Samuel Bronston’s epic El Cid.

The importance of castles is that they are a direct connection between generations through the ages and teach us much about our past. As well as being visually spectacular, they hover over all of us, of each generation.

There are about 2,500 castles in Spain and their location always tells us something about what was happening when they were built; and especially, who needed protection from whom.

Curiously, the province with the most castles, Jaén, has seen no English-language film made in any of its castles, for the moment.

There are also doubts about what a castle is. Some city walls, such as those of Artajona, Navarre, which depicts Nottingham in the film ‘Robin and Marian’, resemble castles, while the frequently filmed walls of Ávila don’t.

The Arabs distinguished an Alcazaba (walled city) from an Alcázar (castle), although the difference is often minimal.

Many castles appear in English-language feature films, while the unbearably successful Game of Thrones, has used many of the same places, as in the case of the castle of Almodóvar del Río in the province of Córdoba; High Garden in the series, where Omar Sharif made his last film in Spain and Ava Gardner her last ever. It was called ‘Harem’ and the castle represented nothing less than Constantinople.

Spanish Castles are not only about the past; they can also encourage visitors to explore Spain’s rich heritage and to encourage people to visit off the beaten track locations throughout the year, not just in summer.

For more information contact bobyareham@gmail.com Also, if you would like the text, all 630 pages of my Movies Made in Spain project, just contact me. No charge; flattery accepted. 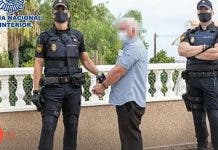 James Warren - 26 Oct, 2020 @ 11:15
POLICIA Nacional have revealed more details of the arrest of Irish drug smuggler John Gilligan that could possibly link him with a...